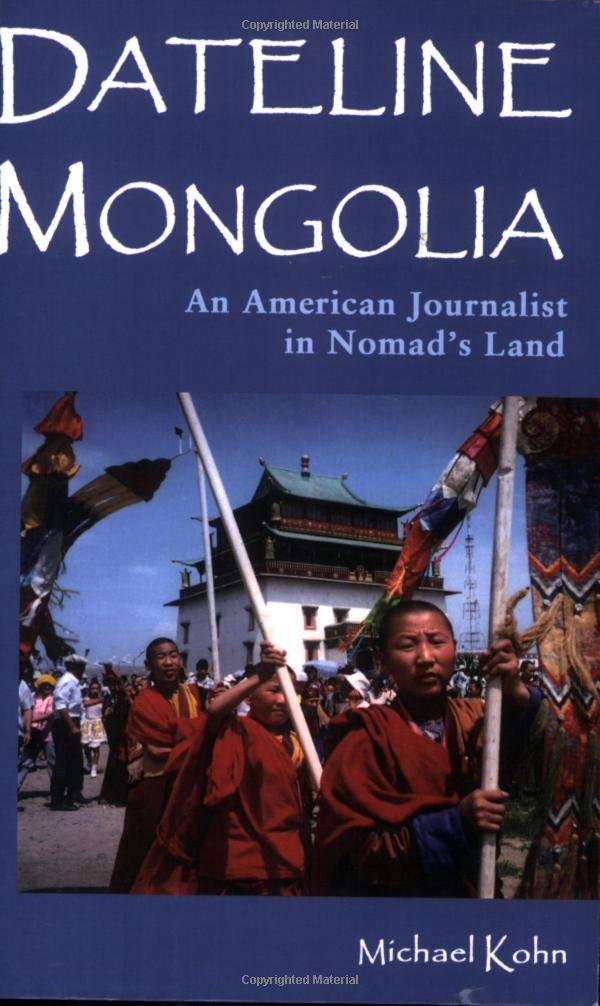 A rare look at the hidden side of Mongolia, Asia's newest democracy.

“Dateline Mongolia? A line to date with Mongolians, maybe… Put it on the Romance section.”

Fear and Loathing in Las Vegas, minus the drugs, meets Forrest Gump, if there was a Mongolian version.

Author Michael Kohn worked as the Editor-in-Chief of Mongol Messenger, the first English newspaper by state-owned MonTsaMe news agency, between 1996 and 1998. During this time he covered several major events, traveled all over the country, became almost fluent in Mongolian and told the most underrated parts of Mongolia’s history from an adventurous journalist’s perspective. I mean, this book’s a great resource for Gen Xers or Yers or Zers, or whoever’s interested in the history of 1990s when Mongolia was roughing it as a Post-Soviet country.

First off, there were some spelling mistakes of Mongolian words (отор, or the process of grazing animals in far areas, was written as otog, which actually means tribe). There was one logical inconsistency in the beginning as well. This Bold guy was fluent in English in one instance, and in another chapter he was a gesticulating simpleton. But don’t let this distract you. This book is concise, funny and insightful–one of the rare gems that fill you in and stay with you forever. The book fills you in on what this nation is coming from and where it might be heading to in a comprehensive way that no other traveler could every have. This is because the author was more than an itinerant writer or a volunteer in khuduu, he was a journalist who had been immersed in all facets of the Mongolian culture. And it’s even better if you’re a Mongolian! What engaged me the most was that the events described in this book were things I vaguely heard of from my parents and all, making me nod every now and then.

Every morning I was woken up by an itinerant milk seller who stood in the plaza below shouting at the top of his lungs: “Suu-arooo! Suu-arooo!” (“Milk! Milk!”)

This made me chuckle. Then it got me thinking. The milk sellers would stand in front of a whole block and yell at the top of his lungs so that everyone could hear him. That’s some vociferousness.

There you have it, folks. The Government must have a House of Un-Mongolian Activities Committee, and shoot anyone who as much as giggled in public.

Asked [by the Playboy magazine] how the USSR could solve its financial woes [in 1989, Gary Kasparov] said the country should sell the Kuril islands to Japan, East Germany to West Germany and Mongolia to China. Insulted Mongol artists sent Kasparov a group letter explaining that Mongolia was an independent country and not for sale. They advised him to “stick to chess, not politics.”

Now I know a cool anecdote to tell elderly Mongolians or Russians–but, wait a minute! Playboy magazine interviewed a chess master?! Was the Revenge of the Nerds that well received back then?

Other tourists came because Mongolia was, well Mongolia, a synonym for “remote,” an attraction in itself …

Yeah, yeah, rub it in. Some of us have a fear of missing out and like to be in the loop and on the scene, thank you.

I accepted the shot of vodka and took a ceremonial sip, getting into the spirit of Mongolia’s second national pastime… [Danzan Rabjaa] could turn water into vodka (clearly an important skill in Mongolia)…

Well, judging by how a man who turned water into wine was received in the West, I’d say it’s a phenomenal skill, dude.

That’s a little too subjective, don’t you think?

Ooh, that hit hard. And close.

This is a Buddhist mantra super common in Mongolia. Never knew what this actually meant. Interesting!

The Local legend vaguely sounded like a story originally reported by Roy Chapman Andrews who promised Mongolia’s prime minister that he would capture the dangerous “allergorhai-horhai”. “It is shaped like a sausage, about two feet long, has no head nor legs and is so poisonous that merely touching it means instant death,” the Mongol premier told Andrews.

Because of high elevation and lack of urban light, Mongolia is one of the best places in the world to stargaze.

Hm… this is something that’s very underrated in Mongolia. At 1,500 m above sea level, the Gobi Desert remains a poor man’s Atacama.

… an Englishman named Williams who had gone to the [Flaming Cliffs of the] Gobi with a group of scientists, and, paying them off, returned with eight boxes full of dinosaur bones that he passed out to friends at parties. “Don’t worry,” he said when I protested. “They are all over the place down there, as plentiful as cow shit!”

Thanks to assholes like him, most bones have been getting smuggled out of the country. Seriously, who the hell gives away another nation’s treasures at a party?

Five cairns out of five cairns.

So what do you think? Do you want to read this book? You can buy it here:

Also, is there any other book or film or restaurant you want us to review? Let us know in the comments section.  Like us on Facebook and Twitter for more.

About Natso Baatarkhuu
Natso Baatarkhuu lives in Mongolia and writes in English. His works have appeared in Cracked.com and The UB Post, and he started this website. He dreams of publishing novels and selling screenplays someday.

Natso Baatarkhuu lives in Mongolia and writes in English. His works have appeared in Cracked.com and The UB Post, and he started this website. He dreams of publishing novels and selling screenplays someday.